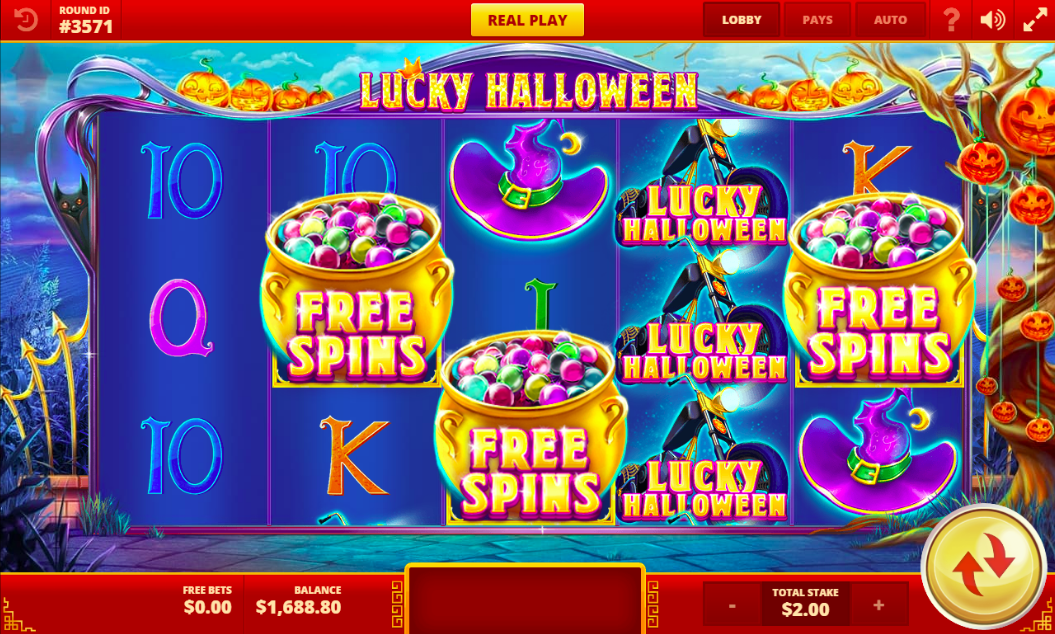 We introduce “Lucky Halloween” of Bellajon Casino. This video slot is the video slot that Red Tiger created and offers. Whether the developer targets the Japanese, compared with other video slots of the company, the explanation of the video slot etc is stated securely in Japanese. I often see descriptions in English only, or descriptions in strange Japanese, but this video slot does not have that kind of thing so I can feel it. In addition, the Japanese notation is also shown in the symbol picture. Japanese is also used as a symbol and “free spin” instead of “bonus” and “free spin” instead of “Bonus”. I do not know if the developers are Japanese or Japanese, but I have a sense of incongruity at first glance. It is because the playing side is accustomed to English notation, but it is a rare video slot in a sense.
The biggest feature of this video slot is that it is a character action called “pumpkin biker” that occurs when the reel rotates, and there are specifications to invoke various high payouts. As soon as the reel starts, “Pumpkin” appears from the left side, it is an opportunity for the appearance of “pumpkin biker”. Naturally, there are things that you may be caught. If the reel gets dark, there are two stages, sometimes it is still gashing at this point. When the engine sound of the motorcycle rings “chance” is definite. “Pumpkin Biker” appears from the left and performs various actions.
The head of “pumpkin biker” is “pumpkin” but throwing that “pumpkin”, when the reel turns whitish and discolorous, many identical symbols appear and attract high dividends. If you throw more than one “pumpkin”, two to six “Wild” symbols will appear on the reel. While doing a wheelie, we sometimes tow a 3 x 3 “Big Wild”. If you play 100 times, there are quite a lot of actions that you can surely see and enjoy the video slot.
There are 12 symbols including “Wild” and “Bonus” symbols. “Wild” “Bikes (written in Lucky Halloween and graphics)” “Hats” “Cat” “Perfume” “Bats” “A” “K” “Q” “J” “10” from the highest dividend . The high-rate dividend pattern is a payout of 24 times to 60 times in triplicate and 100 times to 400 times in 5 series. Since the effective line is 20 lines and the minimum bet amount is 0.1 dollars, it is a video slot that is easy to play because it can play at a low price.
There are many productions that you can enjoy such as “bonus game” and “free spin”. First of all, when symbols are aligned on the activated line and the payout is finalized, when “Pumpkin” of “tree” located on the right side of the reel is lit, it will make a multiple of the dividend. It seems a bit strange that “pumpkin” is “tree”, but it will light from the bottom and proceed 2 times, 3 times. It reaches 800 times when it reaches the end. However, as long as there is nothing extraordinary, I will not reach here, but when I was actually playing it is lit up to 16 times and 32 times.
“Bonus Game” can be earned if “Bonus Symbol” appears more than three in the reel. It seems that it is named “full moon bonus”. The content of the game is a specification that can obtain dividends with 6 option games. The 6 option chance will continue until “Collect” comes out. It is a specification that you can earn higher dividends as you advance the road that follows the castle like Sugoroku. Sometimes we only advance by one square or as many as ten squares. Although I have won a “bonus game” several times, I have not experienced a few squares and have traveled far enough to the middle stage. I got a dividend of about 40 times to 80 times the BET amount. If you can go to the top, a very high dividend is noted.
“Free Spin” can also be acquired by stopping three or more “free spin symbols” in the reel. “Pumpkin” will appear again and 3 times will decide the number of “free spins”. The number of “free spins” is 10 times, 12 times, 15 times, 13 times, 20 times, 23 times, so the content seems to be different for each game. Although “Free Spin Symbols” may be further arranged during this “Free Spin Game”, the number of “Free Spins” at that time seems to be somewhat suppressed. It seems to be about half of the “free spins” that you can earn for the first time like 3 times, 4 times, 7 times etc.
Anyway, this video slot has many actions, I will not get bored. I have many opportunities to select and play 100 automatic plays, but there are times when the appearance of “pumpkin rider”, acquisition of “free spin game”, acquisition of “bonus game” I have a chance. “Pumpkin rider” is also sometimes gashing, but there is expectation as to what kind of things will be done when it emerges, three choices of “free spin”, six choices of “bonus”, his own intuition, luck There is a thrilling feeling that you can earn dividends with. Perhaps the biggest pleasure of this video slot may be that you ‘re worrying about “What would you like to do?” I was playing with this video slot before writing this, but I was able to earn a dividend of 107 dollars with a $ 0.1 BET. I think that it is luck by chance, but there is a dream that you can earn a dividend of 100 dollars by $ 0.1 BET.